Posted by travisthewarrior on May 18, 2013 in Events, Houston, Radiation

We went and met Lucy’s nephew, Ker, and his wife Rachel and their two kids Audrey and Bradley on Saturday.  They invited us to their beautiful swim and tennis club for lunch.  The food was delicious and the kids were able to go and check out all the cool things the club has to offer.  We had such a good time talking and getting to know each other.  When we left, we all said that our cheeks were hurting from laughing so much.  Thanks so much you guys!  We really enjoyed meeting you and in fact, we had a blast.  We look forward to catching up the next time you are out to see Lucy in Encinitas. 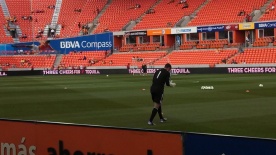 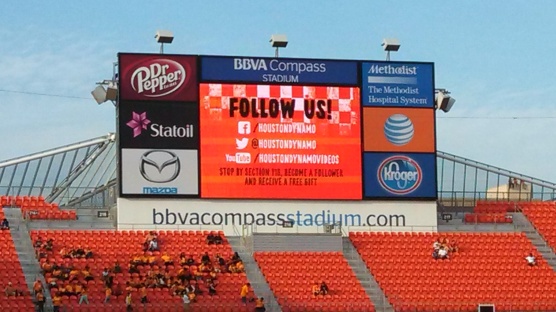 On Saturday evening, we were invited to go watch the Houston Dynamo (MLS) game against the New England Revolution.  One of the members of the Dynamo executive staff, Stephanie, sent us tickets and had us park in the VIP Parking are where the teams parked.  As we pulled up, the NE Revolution players pulled up in their bus and walked into the stadium right in front of us.  We went inside the team entrance to the stadium and were greeted by Stephanie, the Dynamo President, Chris Canetti, Executive VP, Stephen Powell, Senior VP, David Tagliarino and former Dynamo player, Eddie Robinson.  Stephanie then introduced us to the Captain of the Dynamo Girls, Melissa, and we were able to take some pictures.  Wow…what a greeting!  After introducing ourselves and talking with everyone for a few minutes, we were then led down the player tunnel and out onto the field where we watched the team warm up.  We made sure to take some notes to bring back to our team.  For the game, Stephanie took us down to mid-field where we had field level seats, just behind the advertisement boards that circle the field.  What a great view of the game up so close to the action!  It was a great game with a lot of action but arguably some poor officiating.  There were multiple yellow cards and 2 red cards which sent 1 Dynamo player and 1 Revolution player to the locker room within the first 20 minutes of the game.  The Dynamo led the game in possession and had probably 15 quality shots on goal but could not get them to go in.  The Revolution had half as many shots but managed to score and win the game.  It was still great to watch.  After the game, we were led back up the player tunnel where we met some of the families and Stephanie presented Travis with a sack pack that had a Dynamo Jersey and Ball inside.  As the Dynamo players came out of their locker room, Stephanie would have them come over to meet us and sign the soccer ball for Travis.  They even posed for pictures with Travis before they left the stadium.  We couldn’t have imagined a more perfect experience and can’t thank Stephanie and the Houston Dynamo family enough for doing all they did for Travis.  He was one tired boy when we got back home but was smiling from ear to ear.  THANK YOU!

Sunday was a rest and catch up day for us.  We slept in after being out so late and then went on to tackle as much school work as we could to take back to Mrs. Roberts.  It is a challenge to keep up with the pace of the class but it keeps us focused and helps pass the time.

Thanks to the Brucia family for the great dinner that Tyler and Grandma enjoyed over the weekend.  They said everything was delicious and we really appreciate it!