Posted by travisthewarrior on May 5, 2013 in Houston, Radiation

On Saturday after breakfast, we watched the movie Life of Pi.  Travis really liked it!  We went out to watch a soccer game at the Houston Amateur Sports Park where the Houston Dynamo Academy teams play.  We had a picnic lunch, threw a Nerf football and kicked the soccer ball around for a little bit.  Travis’ energy level gets low quickly and his muscles are fatigued so we are always trying to do little things to build him back up. On the way back home, we stopped by Trader Joes for some provisions and always come out of there with more than we were expecting.  We had been told about a place to get a good burger so we went out and had Whataburger.  They had some good onion rings, milkshakes and we liked the spicy ketchup.  It is definitely a step up over normal fast food (even better than In-N-Out).  We came back home and watched The Hobbit which Travis really liked too.  Back in Carlsbad, Tyler and Grandma went out for Yogurt Shack and a movie, Iron Man 3, which Tyler really liked.  All in all, it was a good day!

On Sunday, we had breakfast and went to church.  We have now been to 3 types of masses (Traditional, Contemporary and Youth) at St. Cyril of Alexandria.  We like certain things about each one but Travis seemed to like it during the Youth mass when the priest was talking like characters from The Hobbit as he related to the teenagers.  The music/choir are good at each one too.  After church, Travis wanted to celebrate Cinco de Mayo with some tacos and nachos, so we went to Taco Cabana.  It was pretty good for fast food and kind of reminded us of Rubio’s back in California. 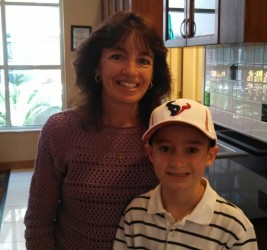 One of our friends from preschool, Lisa, was in Houston for the weekend to visit her brother, Kevin, and they stopped by after lunch.  Kevin works with the Houston Texans organization as a Pro Scout and they brought a hat for Travis signed by the Houston Texans’ JJ Watt (#99).  It is amazing since we just saw a special on JJ Watt several months ago and Travis really liked him because he is such a humble person and is always giving back to the community.  Wow…Travis can’t stop smiling from ear to ear!  He went right up and started working on thank you cards for Lisa, Kevin and JJ.  Thanks so much you guys!

Then on Sunday afternoon, our new friends, Christyn, Scott, Madison, Jackson and Mason, invited us to their house for dinner.  We had a great time talking, playing and eating.  There is just nothing like cooking on the grill and sharing good company.  Thank you all so much for inviting us into your beautiful home and making us feel so welcome.  Travis said that was the best meal he has had since being in Texas.  That is saying something coming from him since he has had some “quality” food since being here.  He had a great time playing with Mason and Jackson and just being able to hang out with some other kids.

We came back home and watched Chasing Mavericks, a good movie based on a true story of surfer, Jay Moriarty.  We have been wanting to watch it for quite some time and finally had the chance.  Thanks Red Box!

We had a great weekend which almost felt normal!