Posted by travisthewarrior on October 11, 2013 in Chemotherapy, Events

Some of you may be aware that Lynne has been working on a special project for Bethlehem Preschool over these last couple of months.  When we found out back in June that she would not be available to teach in the fall in order to take care of Travis during his chemo treatments, she discussed working on some projects that would benefit the school and help keep her connected.   She partnered with the organization Shoes with Heart whose mission is to provide shoes to impoverished nations.  They have found that it is more cost effective to clean and refurbish used shoes than it is to buy them new.  So, they went to work on a Shoe Drive and set a goal of collecting 2000 pounds of shoes.  The problem was that it was too close to the end of the school year to begin the drive and be able to reach their goal, so Lynne came up with a Flyer asking parents to save their shoes over the summer and bring them to donate when school started again in September.  She also sent it out to our friends, neighbors and anyone else who may have a few pair of shoes to donate.

Over the course of the summer, Lynne quickly realized that the bags of shoes would eventually outgrow the space we have in the garage and she called Encinitas Self Storage to see about the short term use of a storage space.  They graciously offered to donate a storage space in support of the shoe drive and we never missed an opportunity to mention their generosity.  Lynne also contacted the Community Resource Center, Platypus Kids, La Costa Kids, Spin Again and Rancho Coastal Humane Society Thrift Shop about donating any shoes they were unable to sell.  There were also donations by Bethlehem Preschool parents, Carlsbad by the Sea residents, Carlsbad Wave soccer, City of Hope 2 Day walkers, St. Andrews Rummage Sale, Faith and Works group, friends and neighbors.

Thanks for the Shoes!

Room for One More Bag! 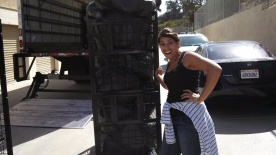 The Truck is Loaded!

After personally handling ~2000+ pairs of shoes, loading them into 86 plastic bags and reaching their goal of over 2000 pounds (see, 1 pair of shoes ~= 1 pound and each bag weighed ~25 pounds), it was great to have the truck come and load them up.  Thanks Cheyanne, Jonathon and Travis for your help on loading day!  This is what Lynne shared along with some of her “Lessons Learned:”

I would first like to thank each of you for taking the time to participate in the Shoe Drive.  Involving your family, relatives, friends, neighbors, and social groups, etc. to participate in our fundraiser brings us together in this great community.  It is something that I love being a part of.

At first, the shoe drive sounded easy.  But then I realized what I had gotten myself into.  Donations didn’t come in as fast as I anticipated.  By the half way mark (September 19), well I started to panic.  We only had about 450 pounds.  A week later (September 24), we had broken the 1,000 pound mark.  There was light at the end of the tunnel.  By September 30, we had 1,725 pounds but we were not done.  On October 2, we made our goal and had collected 2,025 pounds.  Now I could breathe again, but that wasn’t the end.  On October 6, Tyler and I took the last five bags over to the storage unit, which rounded us out to 2,150 pounds of shoes.  Unbelievable!  Shoes with Heart is scheduled to pick up the shoes on Thursday, October 10, sometime in the afternoon.  Yay!

Here are a few things that I have learned from doing a Shoe Drive.

2.    There is a vague understanding of the phrase “All Shoes Must Come In Pairs”.  There were 48 shoes donated from various sources that had no matches.

3.    Shoe Drive should mean shoes, right? There were other items donated besides shoes, (i.e. makeup, pair of shorts, three hats, one broken purse, a tie, and a sequined belt.)

4.    I can say with certainty that I have touched (with gloves) every shoe that was donated.  Please don’t spread that around.

6.    Every plastic bag, paper bag and box used was recycled.

7.    Doing a project like this with you all is a “Priceless Experience”.