Posted by travisthewarrior on May 31, 2013 in Chemotherapy, Radiation 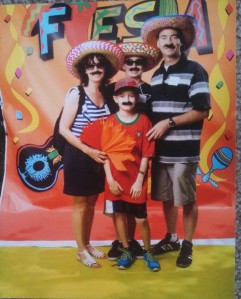 It has been almost a week since we arrived back home and we have been enjoying our time together as we settle back into somewhat of a normal life (for now).  Maybe it’s just me but everything seems so much more vivid as we have time to take it all in.  We have had a busy week despite Travis having the week off from school.  Lynne and Travis are still on Houston time and waking up pretty early since Houston is 2 hours ahead of us.  We need to get that fixed!  Travis has been feeling pretty well with the exception of having a headache most of Monday.  We handled it with Tylenol and the Doctor had us increase his steroid for the day and then taper it back down over the week.  They said it is most likely due to the radiation treatments and he hasn’t complained since Monday afternoon.

We had Soccer practice on Wednesday and Travis wanted to go out and see the guys.  It was great to have him out there and the boys really enjoyed seeing him again too.  It had been a couple of months.  Travis even tried to do some of the running with the boys at the end of practice which we were very worried about given that his leg strength needs a lot of work.  He made it through with a jogging pace and needless to say, he slept good that night!  We came home to a wonderful dinner provided by the Garman family.  With their 2 month old baby girl and their 2 other little girls just starting to feel better, we really felt guilty about the fact that they were bringing us dinner.  They have way more on their plate then we do if you know what I mean.  They wouldn’t let us talk them out of it and we really appreciate all that they do for us.  You all are awesome!

On Thursday morning, we were all up early to see Grandma off to the airport.  It was hard to believe but Grandma headed home after being with us for 6 weeks.  We really appreciate all that you did to come and help us out on the home front so that we could focus on Travis’ treatment in Houston.  We know that Grandma really enjoyed spending so much time with Tyler, meeting so many of our friends and eating so well thanks to all those incredible dinners over the last 6 weeks.  It was great that Grandma was able to visit Houston over Mother’s Day and be here for most of the week when we returned home with Travis.  We received word that the Mother ship had landed safe and sound in Nashville.  We love ya and Cisco misses his outside buddy!

Later Thursday evening, we went to help out at the Bethlehem Preschool Art Festival.  It is always such a fun event where we get to see so many of the kids and their families and have great food while we anxiously await the results of the Raffles and Auction.  This year was even that much more special since Lynne had been out of her classroom for a couple of months.  She is really looking forward to returning next week to finish out the year with the kids.  Thanks so much to our Bethlehem family for all that you do for us!  Thanks also to Wise family for the great gift for Travis!  We were not trying to bid up the auction…Travis really wanted it!

From there, we headed over to the ECC Open House which happened to be on the same night.  We were so happy to be back in Mrs. Roberts’ class with Travis showing us his work.  It was great to see all of his friends and their parents to thank them and let them know we are all doing ok.  Mrs. Roberts welcomed Travis back with a big old hug.  Even though we stayed connected to the class while we were gone, it is nice to be home!  We found out that Friday morning would be the last School Spirit Assembly of the year so we had to attend.  Even though Travis doesn’t start back at school officially until Monday, we just couldn’t miss the last time the whole school got together.  We had so much fun seeing everyone.

We had our first follow up appointment down at Rady Children’s hospital in the afternoon.  Travis is doing really well and they are very pleased with his treatment and progress.  We will meet with the Doctor next week to go over the plan for moving forward.  We came home and had dinner provided by the Nielson family again.  Thank you so much Bridget!  You always bring enough to feed the Selinka Army.